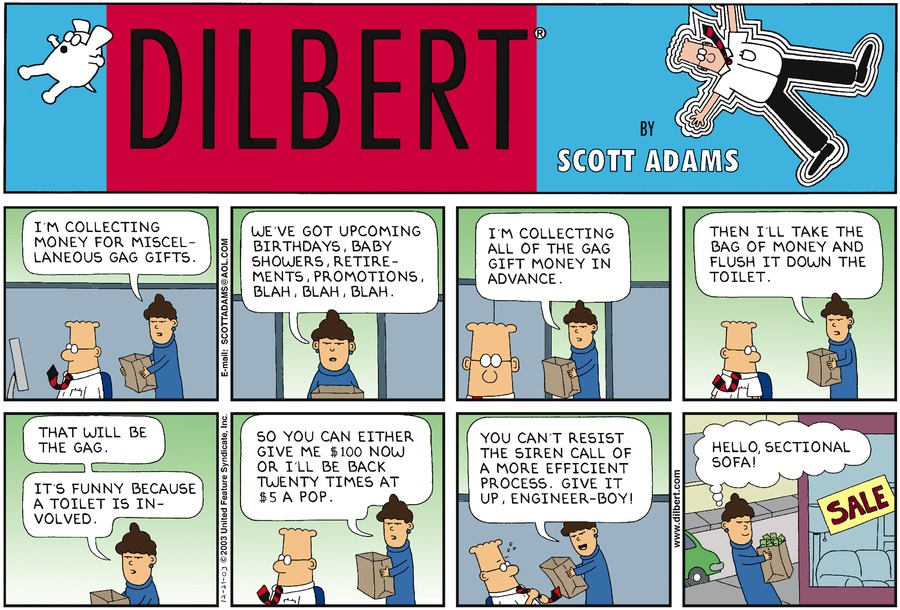 Carol: "I'm collecting money for miscellaneous gag gifts." "We've got upcoming birthdays, baby showers, retirements, promotions, blah, blah, blah." "I'm collecting all of the gag gift money in advance." "Then I'll take the bag of money and flush it down the toilet." "That will be the gag. It's funny because a toilet is involved." "So you can either give me $100 now or I'll be back twenty times at $5 a pop." "You can't resist the siren call of a more efficient process. Give it up, engineer-boy!" "Hello, sectional sofa!"

View more books now
Thank you for voting.
Hmm. Something went wrong. We will take a look as soon as we can. 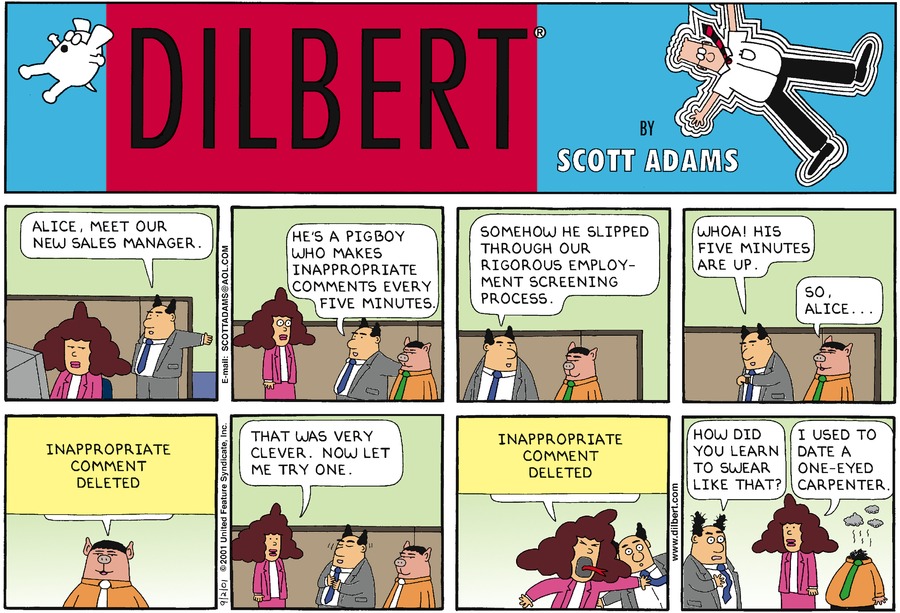 Alice is sitting at her desk. The Boss approaches from behind and says, "Alice, meet our new sales manager." Alice stands up. The Pigboy enters and stands next to The Boss. The Boss says, "He's a Pigboy who makes inappropriate comments every five minutes." The Boss turns to the Pigboy and says, "Somehow he slipped through our rigorous employment screening process." The Boss looks at his watch and says, "Whoa! His five minutes are up." The Pigboy starts, "So Alice..." Blocking the rest of the Pigboy's comment is "Inappropriate Comment Deleted." The Boss is chuckling. Alice says, "That was very clever. Now let me try one." Alice's pushes The Boss out of the way and screams profanity at the Pigboy. Her comment is also blocked by, "Inappropriate Comment Deleted." The Pigboy's head has exploded. Visibly frazzled, The Boss turns to Alice and asks, "How did you learn to swear like that?" Alice responds, "I used to date a one-eyed carpenter."

The Hairdresser Illuminati. Dogbert: Before we start, I'll need to see a list of your political views. Hoo-boy, this is some crazy stuff. I have just the right hairstyle for this. There. That should keep you out of The White House.

Carol: Dilbert should be here soon to fill in for the babysitter. Your dad and I need to leave now. Just let him in. We turned off our phones, so don't try to reach us on our date night. Narrator: Two hours later. Boy: I don't think he's coming. Girl: I say we Airbnb this place.

Wally Gives Back The Baby

Dilbert: How's your adopted Elbonian baby doing? Wally: I had to give it back. It was a lot needier than I expected. Dilbert: Was the baby a boy or a girl? Wally: How would I know? It couldn't even speak yet.