Tags #too underfunded, #succeed, #slow day, #slide toward failure, #moms unconditional love, #hold me to that

Dilbert and Dilmom are in the kitchen. Dilmom cuts carrots. Dilbert says, "I'm working on a project that is too under-funded to succeed." Dilbert says, "Every day is a slow but inevitable slide toward failure and humilation." Dilbert says, "At least I'll always have my mom's unconditional love." Dilmom says, "Are you going to hold me to that?"

View more books now
Thank you for voting.
Hmm. Something went wrong. We will take a look as soon as we can. 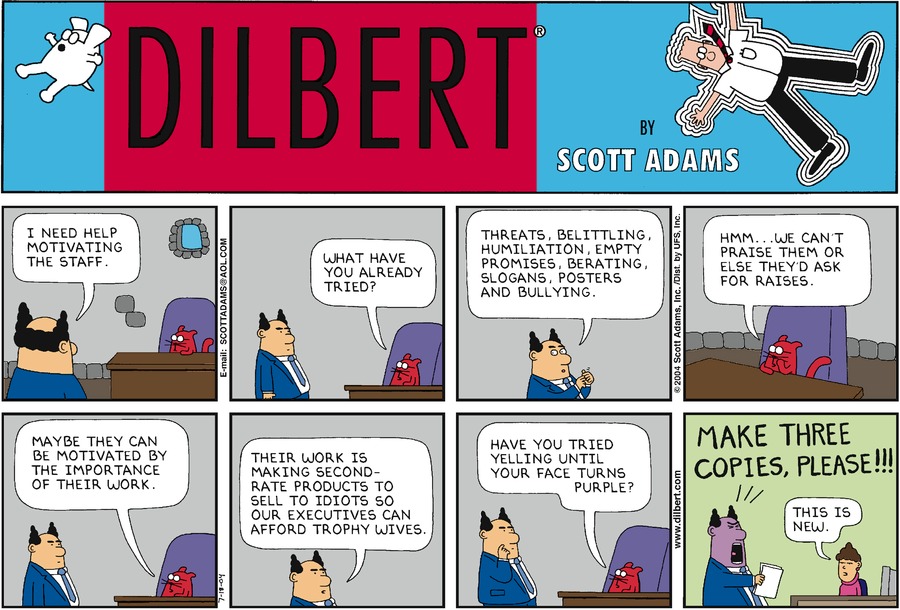 The boss; I need help motivating the staff. Catbert: what have you already tried? The Boss: Threats, belittling, humiliation, empty promises, berating, slogans , posters and bullying. Catbert: hmmm...we can't praise them or they'd as for raises. Catbert: Maybe they can be motivated by the importance of their work. The boss: their work is making second rate products to sell to idiots so our executives can afford trophy wives. Catbert: have you tried yelling until your face turns purple? The boss> make three copies, please!!!! Carol: This is new. 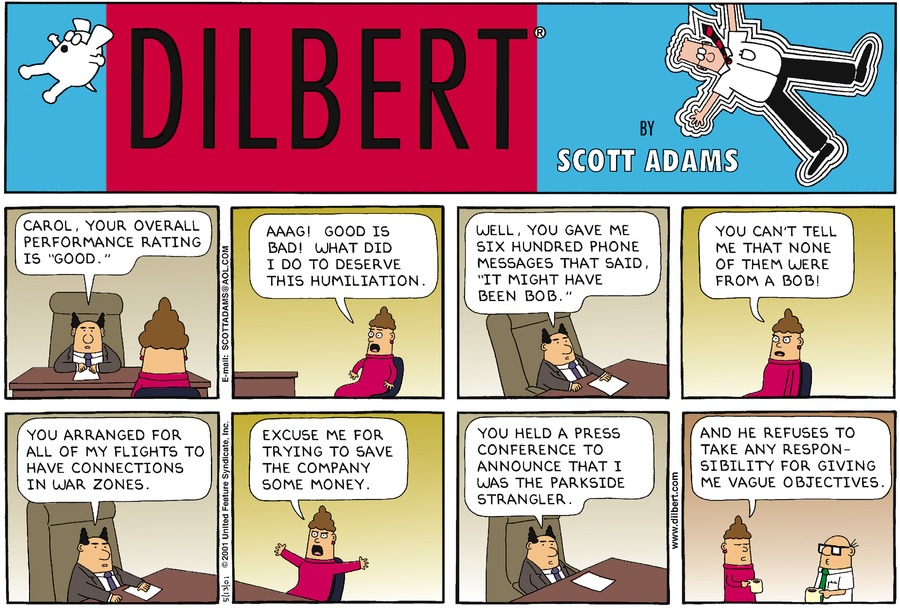 Carol sits across from the Boss, who says, "Carol, your overall performance rating is 'good.'" Carol screams, "AAAG! Good is bad! What did I do to deserve this humiliation?" The Boss replies, "Well, you gave me six hundred phone messages that said, 'It might have been Bob.'" Carol furiously replies, "You can't tell me that none of them were from a Bob." The Boss continues, "You arranged for all of my flights to have connections in war zones." Carol throws up her arms and says, "Excuse me for trying to save the company some money." The Boss says, "You held a press conference to announce that I was the Parkside Strangler." Later, Carol tells Wally, "And he refuses to take any responsibility for giving me vague objectives."