The boss is holding a briefcase and he says to Carol, who is at her computer: "Carol, you parked in my reserved space." Carol hands a sheet of paper to the boss ans says: "I scheduled you to drive to meetings all day." The boss answers: "Oh." Carol is at her cubicle and thinks: "Tomorrow I move my stuff into his office and the coup is complete." 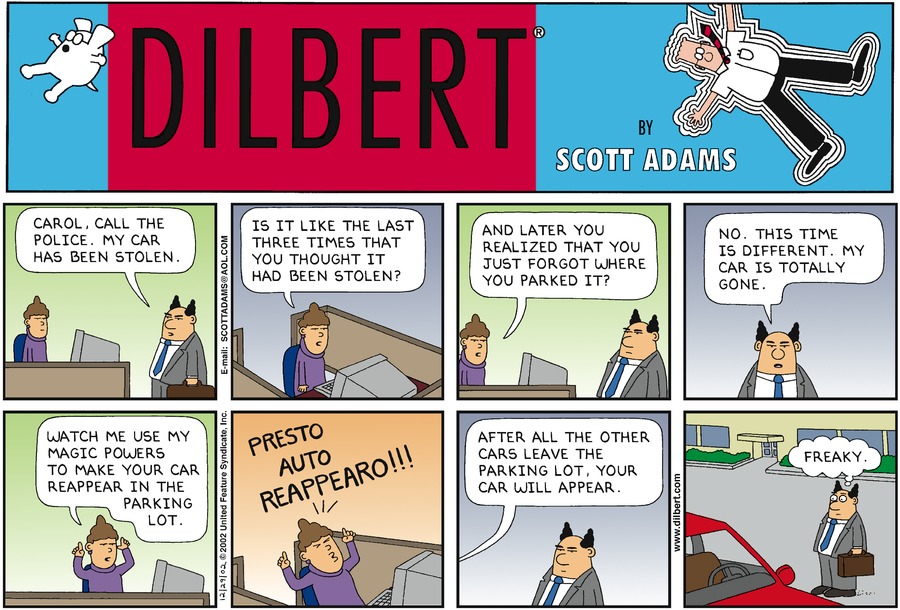 The Boss says to Carol, "Carol call the police. My car has been stolen." Carol responds, "Is it like the last three times that you thought it had been stolen?" Carol continues, "And later you realized you just forgot where you parked it?" The Boss replies, "No. This time is different. My car is totally gone." Carol puts her hands up in the air and says, "Watch me use my magic powers to make your car reappear in the parking lot." Carol closes her eyes and exclaims, "Presto auto reappearo!!!" Carol says to The Boss, "After all the other cars leave the parking lot, your car will appear." The Boss finds his car in the empty parking lot. He thinks, "Freaky."

"From now on, any engineer can shut down our factory for any reason." "Later we'll film a commercial about how ethical and empowered you are." "Ha! Give me a raise, Tubby, or the factory's going down!" "You can't shut it down, I'm shutting it down until more women are in top management." "I'd like to shut it down for a day, just as an ego booster. Is Tuesday good?" "Didn't any of you hear that there's an endangered bird living in the parking lot??" "I think I parked on it this morning." "Can we get back to the point?"

The speaker greets Wally, "Wally, congratulations on finishing the coffee rehab program." A cab is waiting for Wally. The speaker says, "Our recidivism rate isn't too hot. Our critics blame our location." Wally's cab is parked in front of Starbucks World Headquarters. A voice from inside the building asks, "Who's swimming in our vat?" 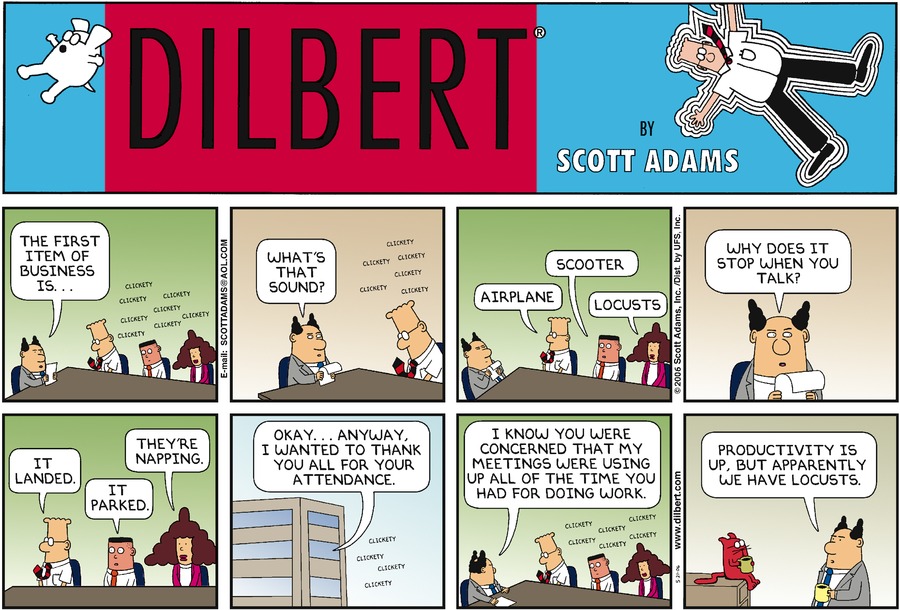